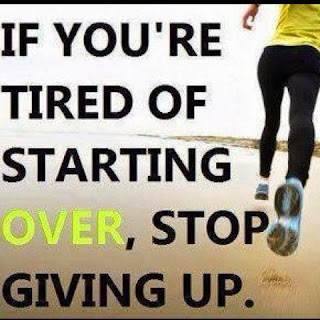 I sometimes feel like I'm the queen of giving up.  I start something only to stop a few days later.  I do this over and over.  I've started over so many times at various things and some things I never even started for fear of failure.

But here I go, starting over again.

I've let my weight get out of control.  I'm at my heaviest and I just feel like a blob.  My clothes do not fit.  My skin is a mess and I'm tired most of the time.   Oh but, none of that matters now if I just focus on getting back up and brushing the dirt off, putting one foot in front of the other.  No matter how many times I may start over, it doesn't matter as long as I'm not giving up for good.

I just finished watching Fat, Sick and Nearly Dead which is a documentary by Joe Cross in which he tells the story of his 60 day juice fast which turned his life around.  So this time starting over for me will begin with a 15 day "reboot" as Joe calls it.   Hopefully this will be a life changing event for me as well.   If you are interested, read about it on Reboot with Joe.  So here's to me starting over again!  Perhaps I won't give up this time!

Forgetting what is behind and straining toward what is ahead, I press on toward the goal to win the prize for which God has called me heavenward in Christ Jesus.
Posted by Suzanne at 1:39 PM